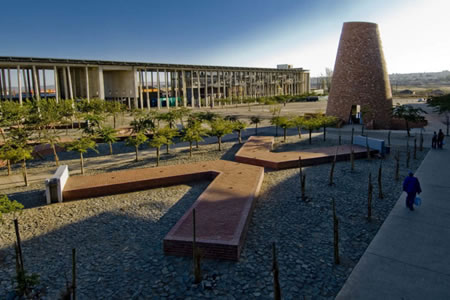 Kliptown is the historic site where the Congress of the People was held on 26 June 1955 during which the Freedom Charter was adopted, a document which remained a cornerstone of the African National Congress (ANC) policy for the next half-century.

Established in 1903, Kliptown is the oldest urban settlement in the Johannesburg area to accommodate people of all races. It is a sprawling, colourful collection of settlements with a thriving informal business sector. But this historical area has not developed its rightful status.

Systematic underdevelopment as a result of Apartheid resulted in increased unemployment and lower levels of disposable income. The area has suffered years of neglect and most of its historical buildings are in serious disrepair.

But that is all about to change. R436-million has been allocated for the regeneration of Kliptown with the re-development being managed by the JDA. The first phase of the development will be completed in time for the 50th anniversary of the signing of the Charter in 2005.

The scope of this development includes the:

The development, which is jointly funded by the Gauteng provincial government and the City of Johannesburg, will turn Kliptown into a heritage site and a premier tourist destination in the city, while improving the quality of life of the local community, and turning the area into a thriving residential and commercial node.

The aim is a sustainable and integrated development guided by an urban renewal programme that will:

Kliptown was established in 1903 and is the oldest residential area in what today makes up Greater Soweto. Together with Sophiatown and Alexandra, Kliptown was one of three freehold townships in the Johannesburg area where black people could own land. It is a fragmented area, bisected by the Klipspruit River and a railway line. On its southern border is the Kliptown commercial centre, made up of medium and small commercial enterprises as well as a considerable amount of informal or semi-formal trading.

The development’s objectives are to:

Kliptown falls within the “Struggle Route”, which aims to link historical sites in Johannesburg.

Despite the profound historical significance of Kliptown, its tourist potential remains untapped. The development programme will focus on promoting business opportunities in the area, which will be achieved by:

Out of 35 designs that were submitted for consideration, the design by StudioMAS Architecture and Urban Design was selected. It comprises a monument, museum, informal and formal retail activities and an open-air area for community gatherings.

When they announced the winner in June 2002, the judges described it as an “exemplary design on a bold scale, with the potential to change Soweto into a city”.

A temporary visitors’ centre is under construction, which will be used as a tourist site until the Walter Sisulu Square of Dedication is developed.

Construction began in June 2003 and the monument will be completed in time to mark the 50th anniversary of the signing of the Charter in June 2005.

Structures constructed on the site include a memorial to be known as the Freedom Charter monument and a museum.

Read more about the design

The ‘Kliptown Our Town Trust’ has established a photographic exhibition, which will be transferred to the Walter Sisulu Square of Dedication once it is complete.

The Kliptown Community Centre, a building previously used by the municipality as a store for building materials, has been refurbished and extended to include an exhibition hall, a media centre, a restaurant specialising in local cuisine and a shop.

The exhibition uses photographs and artefacts to tell the social and political history of Kliptown. “It presents the history of the home of the Freedom Charter, its recent evolution, challenges and problems of urban renewal,” said Gene Duiker, the chief executive of the ‘Kliptown Our Town Trust’. Black and white photographs, dating back to the 1930s, are hung with more colourful contemporary portraits.

Unemployment levels are high in Kliptown, especially within the informal settlements and among women and youth. All projects implemented as part of the Greater Kliptown Development seeks to maximise job and business opportunities.

The development of the retail sector and related commercial activities in the area will be targeted to this growth through:

The area of Greater Kliptown is traversed by an important commuter rail line connecting parts of Soweto to central Johannesburg, with the heavily utilised Kliptown Station close to its centre. The infrastructural programme for Kliptown includes:

Future plans for this project aim to revitalise this historic area by developing Kliptown into a prosperous, desirable, well-managed residential and commercial area, as well as a major national and international heritage and tourism site.

The K43 is the major north-south route through Kliptown. The project includes the upgrading of the K43 road, which provides a link between Kliptown and the Old Potchefstroom Road in Soweto.

This road, which starts in Klipspruit valley road and goes across the Soweto Highway, improves direct links between the southern and northern parts of the area. Phase 1 and 2 of the K43 have been completed. Phase 3 extends the K43 from the Walter Sisulu Square of Dedication to the Golden Highway. In doing so, it provides important access and allows people to travel to and through the area easily. As such, it is a critical component of both transport and economic infrastructure. This programme is expected to be completed by 2006.

Part of the Kliptown development will involve the rehabilitation of the Klipspruit River, which runs through Kliptown. Reed clearance and bank rehabilitation will open up the flood plain, creating viable public parks with recreational facilities.

The sewer infrastructure, including the bulk sewer supply system around the river, will also be upgraded and redeveloped in a move to reduce pollution levels in the river.

Set within a waste management strategy; the measurement indicators of this project are:

It is expected that the upgrading of the sewer system will be completed in 2004.

Fundamental to the long-term growth of Kliptown is the creation of sustainable neighbourhoods. Various housing programmes, including the provision of services and social housing projects, have been planned or initiated in Kliptown.

The goals for this project include: