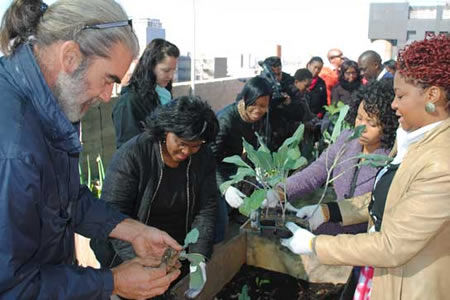 Working with the Johannesburg Housing Company and other partners, the JDA has planted a useful garden on the roof of a building in the inner city. Here, herbal remedies are grown alongside vegetables.

While food security is on the agenda internationally, in its National Development Plan, or Vision 2030, the South African government has made clear its intention to alleviate poverty and reduce inequality by 2030.

In line with this vision, the Johannesburg Development Agency, in partnership with the Johannesburg Housing Company (JHC) and its subsidiary, Makhulong A Matala, has planted Lake Success Rooftop Food Garden on the corner of Peterson and Edith Cavell streets in the inner city of Johannesburg. It is the third such project funded by the JDA.

Makhulong A Matala Makhulong A Matala, a seSotho phrase which translates as “greener pastures”, is a wholly owned subsidiary of the housing company and is responsible for the range of community development and support services that the parent group offers its tenants. The rooftop garden is aimed at empowering people to promote healthy eating, overcoming hunger, transferring skills, reducing unemployment by supplementing the family income through saving on the purchase of fresh vegetables, and alleviating malnutrition and the effects of disease in JHC buildings.

The JHC has six other projects of this nature at its buildings in Johannesburg. There are four rooftop gardens and two ground gardens in Hillbrow, Joubert Park, Troyeville, Newtown, and Fordsburg. In these gardens, spinach, beetroot, onions, tomatoes, cabbage, beans and rosemary are planted, among other crops.

“The City of Johannesburg aims to strengthen the adaptive capacity of the City and its citizens, so that it may become more resilient,” explains Thanduxolo Mendrew, the chief executive of the JDA. “In achieving the ideal of a resilient city as contained in the Joburg 2040 strategy, the JDA supports the development of rooftop gardens to improve the level of food security in the inner city of Johannesburg and acknowledges that urban agriculture forms an important part of food security provisions.

“The partnership with JHC and Makhulong A Matala ensures that the City of Johannesburg actively supports and provides steady supplies of fresh produce for the urban food system.”

His counterpart at the JHC, Elize Strubell, says that for the past 20 years, it has worked to empower those living in downtown Joburg to take pride in the city by saving water and using less electricity to make this the greenest city in which to live.

Susan Monyai, the marketing manager at the JDA, adds that sustainability is an important factor when establishing the food gardens. “As the JDA we understand the role we play in advancing food security in the city.”

A sustainability plan detailing the maintenance of gardening is in place. Lake Success tenants have been taught to understand, and how to start up and manage an organic food garden and cultivation of medicinal herbs at low scale, for livelihoods and to increase the levels of household food security. The plan outlines the advantages of growing one’s own seedlings from seeds against the moderate costs of buying ready grown seedlings, introducing basic business skills for income generation from the project, and using available and free resources such as harvested rain water and grey water harvesting.

Mukhithi Bakali, a civil engineering student living at Lake Success and minder of the garden, says being involved has helped his life a lot. “I now have spare money to buy other important things for school because I don’t have to worry about buying vegetables.”

The members of the food garden share the vegetables and plan to start selling them when they have surplus crop, he adds. “One area we are looking at is maybe selling them to school feeding schemes once we are able to produce the best quality product.”

Tending the garden has become a social activity as those who work there are different people dealing with different problems, he says. Being in the garden is calming and allows them to interact. It has taught him how to work in a group of different people. “We cover [for] each other. When one can’t make it to their scheduled garden time one has to cover for them as we are all dependent on the garden,” Bakali says.

Lindi Malinga, the general manager of Makhulong A Matala, explains: “Makhulong is tasked with trying to alleviate social issues emanating from JHC buildings. This is why members of the food gardens are also taught entrepreneurial skills to help them when it comes to trying to sell their produce.”

Food and Trees for Africa’s Ewald Viljoen is the garden’s facilitator. He says that the plan is to integrate all the gardens so they can help one another as some are not advanced enough yet to sell their surplus.

The aim was not just to plant vegetables but also to plant herbs. “Take for example, this herb stevia, which is a great substitute for sugar and is great for diabetics. Imagine if we can grow this in large numbers. This is where the money is at.”

One just has to take a leaf, dry it, crush it and pour into their tea or coffee and they have replaced sugar with a healthier option, Viljoen says. He has planted another herb at Lake Success called knit bone which is known for healing internal injuries. “I try to integrate the gardens but the tenants want food.”