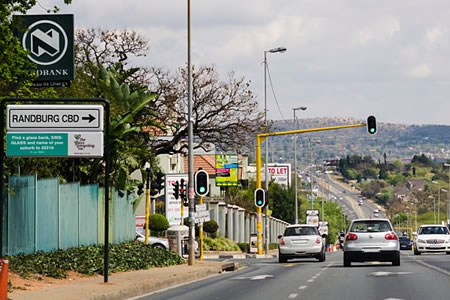 By tackling the ills that have plagued Randburg in the past, a three-year urban revival plan has been devised to attract business and investment back to the area.

Approved by the City of Johannesburg, the project will be implemented by the Johannesburg Development Agency.

The plan aims to revitalise the district by creating:

a clean, safe and attractive environment;
a well-functioning mixed-use area;
increased retail spending in the area;
improved pedestrian and vehicle traffic flows and improved accessibility within the area; and
increased investment and business opportunities.

While the district is in Region 3, an area of relatively high environmental quality comprising commercial and high-income residential areas, Randburg has failed to keep pace with changes in demand and living. This has led to economic decline and degradation of the area.

Despite its status as one of the few decentralised office nodes, the Randburg CBD was hit hard in the 1980s by the development of office parks in the north, with their strong security, privately landscaped surroundings and generous parking.

Another blow came when the mini-bus taxi industry moved into Randburg. Illegal ranks were established, informal trading sprung up around these ranks and grime took root.

The area’s CBD took another hard hit in 2000 when the Northern Metropolitan Local Council moved out of the civic centre after local government restructuring. Squatters invaded the building, leading to further environmental degradation.

The area began to slide and shops and offices closed down as business moved to new developments in Sandton and Rosebank. Between 2000 and 2003, Randburg posted the fastest growing vacancy rates compared to other nodes, such as the Joburg CBD, Bryanston, Fourways, Sandton and Rosebank.

After two illegal taxi ranks were closed, a new R8,9-million taxi rank was opened at the Randburg Mall in 2001, paving the way for the City to initiate developments in the area. In 2004, Johannesburg approved plans to declare the Randburg CBD a city improvement district (CID) and to transform the area into a safe, clean, attractive, user-friendly and desirable commercial node.
The upgrade, a joint effort by the City and the local business community, will ensure “more effective management of public areas, address issues of crime and grime, promote business confidence and play an overarching role in the promotion of the area, particularly the mall”.

The framework for Randburg’s revitalisation includes:

Read more about the projects

As part of the plan, the taxi rank in the area will be upgraded. The council offices will also be upgraded and moved back into the old civic centre, and public spaces and roads will be improved and upgraded.

The revitalisation of the Randburg CBD is expected to reduce the vacancy rates for the existing stock of offices, retail and civic buildings.

Randburg is in the northwestern part of the City of Johannesburg and falls within the administrative Region 3 of the city. It is situated between Sandton in the east, Fourways in the north, Rosebank in the south and Cresta in the west.
It is accessible from major roads: Jan Smuts Avenue and Hendrik Verwoerd, running north south, and Republic Avenue and Bond Avenue, running east west.

Randburg Business District has seen major decline in recent years, but remains a major retail and service centre. In many respects, it has the characteristics of a stagnant or declining node. However, it continues to play an important role in the urban economy and has greater economic significance than many other nodes in the city. The most important economic sectors are retail and business services.

The project’s goal is to develop Randburg as an attractive and vibrant mixed-use node particularly focused on maximising and enhancing its role as a public transportation node and centre for small businesses, and which plays a significant economic role in the context of the City.
To affect this goal, changes and developments that will be undertaken include:

There are plans to upgrade the taxi rank.

Gautrain, the express train, is expected to affect the area’s transport infrastructure. Randburg will serve as an interchange point for passengers wanting to access the train at Sandton, the station nearest Randburg.

To ensure as many council departments as possible set up offices in the old civic centre, plans are being drawn up to redevelop the existing building, while additions have been proposed to house new functions.

Environmental degradation of the public spaces will be tackled. The council will work with utility agencies that collect rubbish, provide electricity, and sewer and water delivery, to improve lighting and better manage the cleaning of streets and public open spaces.