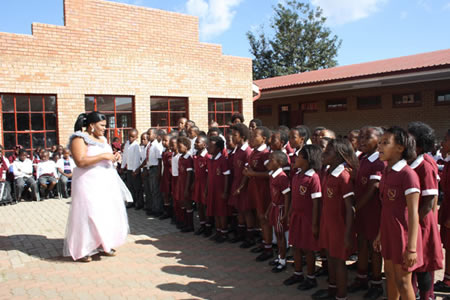 There was great excitement at Welizibuko Primary School in Nancefield, Soweto on Tuesday, 21 April 2015 over the completion of a much-anticipated new hall.

The Johannesburg Development Agency (JDA) joined learners, staff and parents from the Nancefield community in celebrating the opening of the new facility.

The school choir gave a rousing performance, while children gave speeches and recited poems to mark the occasion.

The hall was built by the JDA in partnership with contractors working on the agency’s Nancefield Public Environment Upgrade project, Axton Matrix and Nyoni Projects. In total, R153 000 went towards the completion of the school’s hall.

Speaking at the launch on Tuesday, Communications and Corporate Social Investment Manager Alice Moloto said the JDA was committed in the upliftment of communities in areas where their spatial and other local economic development projects were located.

“JDA policy supports initiatives that contribute to the socio-economic transformation envisaged in the City’s Growth and Development Strategy,” Moloto said

Welizibuko Primary was targeted at the start of the Nancefield upgrade as a potential Corporate Social Investment (CSI) project for the current financial year.

Moloto said the hall will provide learners with a conducive place to hold school events and learning. “We seek to transform society by getting rid of inequality and poverty,” she said.

The school had started building the hall in 2005, but failed to complete it due to lack of funds. JDA and its partners took over construction in 2013.

Welizubuko Principal Veronica Mapule Ledwaba told the assembled audience that the staff and pupils were delighted with the transformation.

“The hall is a very special addition to our school, and we thank the JDA and its partners for helping us complete this hall.” Ledwaba said the hall would also be used as an extension of existing classrooms.