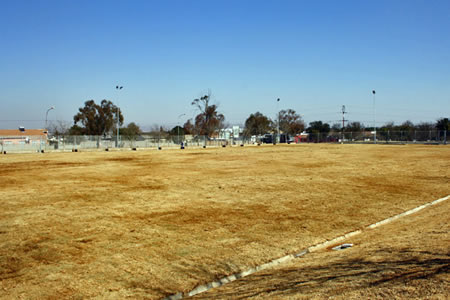 Football fans in Kliptown will soon be playing the beautiful game on a brand-new pitch after a revamp spearheaded by the Johannesburg Development Agency.

The City of Johannesburg works continuously to address apartheid spatial inadequacies through its Corridors of Freedom initiative by making sure all communities have facilities that fulfil their basic needs.

The Corridors of Freedom consist of well-planned transport arteries linked to interchanges where the focus will be on mixed-use development – high-density accommodation supported by office buildings, retail development and opportunities for leisure and recreation.

These Corridors will transform entrenched settlement patterns, which have shunted the majority of residents to the outskirts of the city, away from economic opportunities, access to jobs and growth.

Now, the City, through its development agent, the Johannesburg Development Agency (JDA), has made sure the community of Kliptown in Soweto will no longer play football on a dusty patch of land without adequate ablution facilities.

“We as the JDA have a business plan for Kliptown and part of the plan is highlighting shortfalls or needs in the area. It was indicated that there is no soft landscape in the area like parks and recreational facilities,” said Jocelyn Davis of the JDA.

Davis said the JDA immediately recognised how it could help, because of the game’s popularity in the community.

“I worked on a project near the Ellis Park precinct were we developed a soccer field too because football lovers there used to play gambling games and used to hurt each other when another didn’t accept a loss. Now they play organised games that are regulated by [the Department of] Sport and Recreation,” said Davis.

CONSULTING WITH THE COMMUNITY

After consulting with the football-loving community, the JDA is revamping the facility to ensure that the players play football in adequate facilities that can accommodate their fans, including those with families.

“We are very happy that this community will now play one of the world’s most loved sporting codes in a facility that the City is proud to provide,” said Mbulelo Bezu, deputy director for the Department of Sport and Recreation in Johannesburg.

The field will be open in 2015, allowing time for the grass to grow and for the community to form a facility management committee.

Bezu said: “The field will be for matches only and not for practice. We will be meeting with the various clubs and leagues around the area to draw up a schedule of fixtures to take place and to formalise the games.”

The new football field has two ablution facilities and a house for the caretaker.

The house has one bedroom, one bathroom with a shower and bath, a kitchen and a lounge. A storage room will be turned into an office for the caretaker.

For enhanced security, see-through fencing will surround the football field.