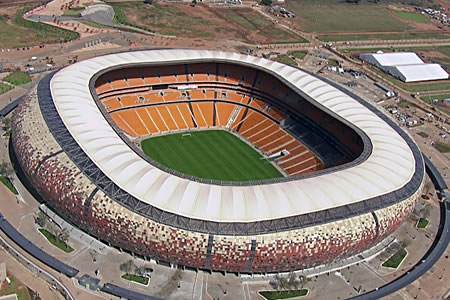 In 2008, the mayor announced that the City would invest more than R120-million in upgrading the Nasrec precinct to support the hosting of the International Broadcast Centre during the 2010 FIFA World Cup.

The 420ha area includes the Johannesburg Expo Centre, one of the largest expo centres in Africa; the 90 000-plus capacity FNB Stadium, known as Soccer City during the World Cup; and the transport hub consisting of the Metrorail Nasrec Station and three Rea Vaya stations.

Nasrec is southwest of Johannesburg’s city centre, on the outskirts of Soweto. Nearby is the Crown Mines Golf Course, designed by Gary Player, and tourism destinations such as Gold Reef City, the Apartheid Museum, Vilakazi Street and Kliptown.

The Johannesburg Development Agency was tasked with the upgrade of the public environment surrounding the stadium and the Rea Vaya infrastructure. The idea was to get people in and out of the Nasrec precinct very quickly, especially during sporting events.

The previously disjointed development of the exhibition centre and stadium, cut off from each other by the criss-cross of four railway lines, is now bridged by a pedestrian walkway connecting the newly built Nasrec railway station and the three new Rea Vaya stations with the stadium, expo centre and International Broadcast Centre.

As an added extra, a small open-air amphitheatre was built next to the massive stadium to give more options for entertainment. The JDA has also added its trademark creative touches, which include unusual street furniture, modern street lights and street art. The precinct now has a much better chance of thriving than before, the JDA believes.

Urban Development Plan, January 2005
[Some photographs and diagrams have been deleted from Chapters 2 and 4 to enhance web usability]

Nasrec is located to the southwest of Johannesburg’s inner city, and is one of the city’s oldest and largest exhibition centres. In 2001, the City of Johannesburg approved the Nasrec precinct as a development node to bridge the apartheid spatial planning gap between its south and north.

To host the International Broadcast Centre here, the City invested R120-million to rent and upgrade the required halls and facilities from the expo centre. In addition, it upgraded various services relating to electricity installation, security and monitoring, waste removal, health and transport.

The JDA focused on the road network. Rand Show Road is one of the main spine roads used by spectators travelling by vehicle and on foot to the stadium and its precinct. It and the adjacent roads, like Nasrec Road, were upgraded by the agency to provide the necessary infrastructure for this event.

Thousands of broadcasters from around the world were based at the broadcast centre during the football tournament, held in June and July 2010. It was not the only upgrade that took place in the region.

Before kickoff, FNB Stadium was upgraded at a cost of R3,8-billion. This entailed demolishing the entire existing structure and constructing a new stadium from scratch; work began in January 2007. Built in 1987, the original FNB Stadium had a capacity of 80 000, with many of the stands open. The new stadium has a capacity of over 90 000 and is completely under roof.

The design of the stadium was selected from a series of concept designs. The calabash, or African pot, designed by architect Bob van Bebber, was selected as being the most recognisable object to represent what would automatically be associated with the African continent for the World Cup.

The stadium was the key venue for all the major events, such as the opening and closing ceremonies and the first and final matches.

Resembling a calabash, the traditional African vessel used for cooking and holding food, the stadium sits on a raised podium. It has a spectacular appearance, especially at night when it is illuminated and looks like it is sitting in a pit of fire.

The outside of the stadium is made up of glass re-enforced concrete panels in a selection of eight earthy colours and two textures to reflect the shades and textures of a traditional calabash. The façade is articulated by 10 vertical slots which are aligned geographically with the nine other host stadiums in the country and the Berlin stadium in Germany, the hosts of the 2006 World Cup.

The upper roof is cantilevered from an enormous triangular spatial ring truss, and is covered by a membrane in a colour similar to that of mine-dump sand.

The completed promenade is approximately 350 metres long and forms the main link between the expo centre and the stadium. Built at a cost of R82-million, the design aims specifically to allow for ease of pedestrian movement between these two anchor points. People crossing the bridge have a beautiful view of the stadium, the Johannesburg skyline and the famous Telkom Tower.

In the middle of the bridge, transparent safety glass has been built into the walkway, allowing pedestrians to watch the trains and buses below. Red and yellow paving bricks, resembling spouting flames, further enhance the fire theme, and have been used heavily.

Arriving at the transport hub, the southern end of the promenade begins with a square and sculpture that forms the gateway towards the stadium and the expo centre. A central meeting point where taxis, Rea Vaya buses, tourist buses and trains all converge, it is spacious and aesthetically pleasing.

A 25m wide bridge with ambient lighting takes pedestrians across the widened Landbou Road and the railway tracks on to a series of ramps that meander gently down to the stadium. The ramps allow for rest and respite with ample water points, shaded seating areas and sculptures.

Just before reaching the stadium, the visitor is greeted by the small amphitheatre, which has a capacity of 500 people. Large paved and grassed areas act as an open air plaza, which was very successful during the World Cup.

The completed hub is a designated visitor public transport node. It provides for taxi, bus and rail transport and a Rea Vaya drop-off and pick-up point for spectators. The hub also has public ablutions and a kiosk, with stairs directing visitors to the stadium.

There is ample parking space for public transport vehicles such as taxis and buses.

The Metrorail Nasrec Station consists of a light aluminium bubble suspended over the railway lines. It should cater for further line extensions and tie in with network upgrades by the South African Rail Commuter Corporation (SARCC), the asset owners.

Two Rea Vaya stations serve passengers on the expo centre side of the precinct. These stations are used mainly to transport passengers to and from Soweto for big sporting events. Another Rea Vaya station, Soccer City Station, is located on the main trunk route on the Pat Mbatha Bus Way. Besides normal Rea Vaya services, the station is also used to get spectators between the stadium and the inner city when major sporting events take place.

With the upgrades completed, the total capacity of the transport hub is approximately 23 280 passengers per hour.