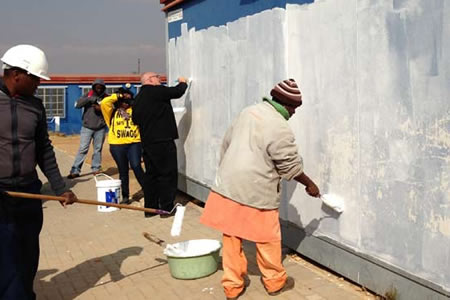 The 67 minutes initiative takes place every year on Nelson Mandela Day (18 July), with people around the world spending 67 minutes doing something positive for their communities. The day commemorates the 67 years that former South African president, Nelson Mandela, spent fighting for social justice and a democratic South Africa.

Ntokozweni community centre is one of the oldest community centres in Johannesburg. Built in 1944 to care for the elderly and vulnerable children in Alexandra, it is now a pre-school and offers day care. Nelson Mandela also trained as a boxer at the centre with former Mr Universe Reg Parks.

The JDA staff members, including Board members Popo Masilo, Professor Wellington Didibhuku Thwala and Dayalan Naidu, spent their 67 minutes sprucing up the centre’s walls with a fresh coat of paint.

Students from the United States’s University of Philadelphia also visited the centre, painting the outside walls, while the National House Building Council replaced broken windows and painted window frames.

Plans to revitalise the centre are in the pipeline, with the agency planning to make a second trip.