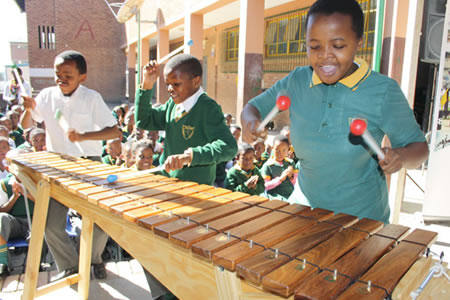 Learners at Carter Primary School in Alexandra celebrated the restoration and upgrading of the school’s toilet facilities at a joyful ceremony on Tuesday, 5 May 2015.

Carter Primary is the latest of a number of schools in disadvantaged areas to benefit from the Johannesburg Development Agency’s (JDA’s) corporate social investment (CSI) programme, which focuses on uplifting communities in areas where its economic development projects are located.

Speaking at Tuesday’s ceremony, JDA Communications and CSI Manager Alice Moloto said these projects aimed to ensure that the agency achieved its objective of caring for local communities in areas where it operated.

The JDA is currently at work on a number of public environment upgrades in Alexandra, including the construction of pedestrian and cycling pathways that will connect with the new walking-cycling bridge being built over the M1 highway.

Moloto said the rehabilitation of Carter Primary’s washroom and toilets would ensure that the children’s education took place within a secure and healthy environment.

Originally built several years ago, the toilet facilities had fallen into disrepair, threatening the learners’ health, undermining their dignity and making their schooling experience an unpleasant one.

The JDA appointed Mjavhino Business Enterprise, a small business based in Alexandra, to completely overhaul the plumbing for the toilets, urinals and washbasins, and to retile the toilet and washroom walls and floors. The project began in July last year and was completed in November, at a cost of R55 000.

Carter Primary School principal Peter Magatho said he and his staff were humbled by the JDA’s gesture, adding that the upgrade had completely changed the quality of life at the school.

“I feel honoured to have JDA coming onto board and ensuring our toilets are refurbished, because it is an area that is largely neglected in black communities,” Mgatho said.

He said that he and his teachers would make sure to teach their learners how to behave appropriately and take good care of their new washroom and toilets.