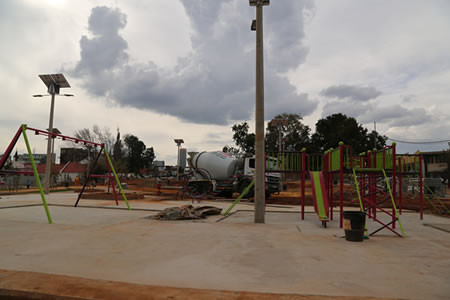 City of Johannesburg
For immediate release

The City of Johannesburg, through its infrastructure development entity, the Johannesburg Development Agency (JDA) and the Johannesburg City Parks and Zoo (JCPZ) are making great strides in transforming the inner city into a vibrant and attractive area with the rejuvenation of parks.

As part of invigorating public spaces, the JCPZ has set aside R12 million for the upgrade of Jeppe Park, which is located in Jeppestown and is one of Johannesburg’s most used urban green spaces.

The rejuvenation of Jeppe Park is in line with the City’s key priorities geared at transforming public spaces into green, clean, conserved area and to further retain businesses and attract tourists to boost the city’s economy by 5% in 2021.

The coverage framework largely focused on providing and improving recreational services and safety at the park by replacing old structures.

The park, which is currently at 90% of its completion stage, will boast newly designed pathways, rubberised surface, play equipment an outdoor gym, park benches made of concrete for durability and ease of use.

In addition to this, five SMMEs were appointed to carry out the upgrades which have resulted in positive economic and social benefits for residents such as employment and revenue generation.

The JDA and JCPZ partnered on the project’s design with Bjala, an organisation that is intimately involved in the community.

Through an integrated stakeholder approach, Bjala, drew input from all stakeholder groups as well as city residents and park users to design safe, inclusive, accessible and sustainable public space through participatory tools and methods.

Issued by the City of Johannesburg

For all other media queries, send an email to mediaqueries@joburg.org.za

THE WATT INTERCHANGE IN WYNBERG UP FOR A FULTON AWARD

12Next
Manage Cookie Consent
To provide the best experiences, we use technologies like cookies to store and/or access device information. Consenting to these technologies will allow us to process data such as browsing behavior or unique IDs on this site. Not consenting or withdrawing consent, may adversely affect certain features and functions.
Manage options Manage services Manage vendors Read more about these purposes
View preferences
{title} {title} {title}
Go to Top