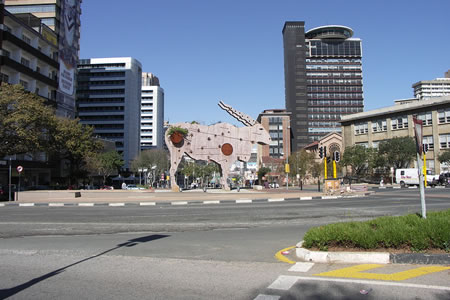 Braamfontein has been a part of Johannesburg since 1886, the year the city was established. Back then, Braamfontein was a farm where people lived and worked, and there was a strong sense of community.

Situated north of the city centre, over time the area developed into an important commercial and economic node of Johannesburg, housing a vibrant business district, the seat of local government and various educational institutions and business corporations.

Then, between the late 1980s and early 2000s, the area went through a period of urban decay causing an exodus of institutions and businesses to more affluent areas. It became degraded and run down, but was fortunate in that its vacancy rates remained some of the lowest in the inner city, even during the worst of these times.

In 2002, the Johannesburg Development Agency (JDA) and the City council embarked on a R13-million regeneration programme for the area, realising how important the location and function of Braamfontein was to the local economy.

Since then, the JDA has spent more than R55-million on the precinct, renewing the area as a centre of business, entertainment and education.

There has also been significant private sector investment in the precinct, with almost R4-billion spent by investors and developers over the last seven years, resulting in rental rates and land values increasing, and vacancy rates dropping below 10 percent.

Braamfontein remains the fourth-largest node for office space in the city of Johannesburg and is home to a number of South African-based multinational corporations as well as one of the country’s premier educational institutions, the University of the Witwatersrand.

It is on a par with other prime office nodes such as Sandton and Melrose Arch. The area, of more than 428 000m2, is now a mixed-use node consisting not only of A- and B-grade office space, but also with a strong residential component, offering both loft and executive-style apartments and budget accommodation.

Today, the success of this regeneration project can be seen in the beautiful tree-lined streetscapes, public art, and safe, well-lit open spaces. The area has become a vibrant social space again, with coffee shops and small restaurants offering daytime entertainment; and at night the precinct is quiet, safe and clean, the result of its active city improvement district, which ensures quality urban management, safety and marketing remain in place.

As a key precinct in Johannesburg, Braamfontein must also go down as one of the most economically diverse. It is the seat of the City of Johannesburg’s local government; the base for the most important institution in the country, the Constitutional Court; and home to one of the most prestigious universities in South Africa, the University of the Witwatersrand, or Wits, as it is colloquially known.And it is a vibrant satellite economic node for the city centre with significant opportunities in the commercial and retail fields. Over the last eight years it has become a vibrant property investment space, with average property transactions increasing from just 37 in 2000 to over 600 in 2008.Add to this the fact that it falls in the city’s cultural arc, strategically linking Newtown and Constitution Hill, two of the JDA’s largest regeneration projects to date. As part of its cultural billing, Braamfontein offers world-class entertainment at the Joburg Theatre Complex, a snapshot into humanity’s past at the Wits Origins Centre, and a closer look at the stars at the Planetarium, to name just a few activities.It is also a key node in terms of transport.The Nelson Mandela Bridge is the key link into Newtown, another prime cultural and entertainment precinct in Johannesburg.There are also other road and rail links on the cards which will make commuting between Braamfontein and the rest of the inner city easier in the long run. The Gautrain Rapid Rail Link involves a modern state-of-the-art rail connection linking Johannesburg with Sandton and Pretoria as well as OR Tambo International Airport. Construction of the Gautrain Park Station is under way in Smit Street.And the City’s Rea Vaya Bus Rapid Transit system will have feeder buses from Braamfontein to its main trunk routes.

The JDA is not currently engaged in any projects in Braamfontein. Its R55-million investment as part of the Braamfontein Precinct Regeneration Programme was successfully completed in 2007.

It achieved its aim of improving the public environment, including:

Started in 2002, the Braamfontein Precinct Regeneration Programme entailed creating a corporate precinct attractive to business and welcoming to regular patrons and visitors.Renovations within Braamfontein are diverse and imaginative, and include the rejuvenation of several corporate buildings. Sappi House, on the corner of Simmonds and Ameshoff streets, the global headquarters of the world’s largest producer of fine paper, was given a R100-million facelift.The programme included the construction of an underground parking bay for the Joburg Theatre Complex, complete with escalators to the theatre levels. The parking bays are used by Sappi employees during the day but are available to the City after 7 pm and over weekends.Bertha Street underwent transformation as an extension of the Nelson Mandela Bridge at the bottom of Braamfontein. The massive eland sculpture erected in 2007 now stands sentinel to Braamfontein and marks the gateway into the inner city.Also part of the initial renovations, the Sappi Theatre Park next to the Joburg Theatre Complex and the National Ballet School was developed in a joint venture with the private sector. The JDA funded the upgrade of the area from Stiemens Street down to and including De Korte Street, and from Bertha Street to Joubert Street Extension, including the area around the council offices. The entire Juta Street between Loveday Street and the M1 offramp was also upgraded.One of the main pedestrian entrances to Wits is located at the junction of Jan Smuts Avenue, Bertha Street and Ameshoff Street. This node is defined as the Wits Gateway.This site has been widened and redefined to give greater pedestrian access across Bertha Street. Nearby, the triangular pavement has been converted into a pleasant pedestrian area with trees, benches and plinths to create added interest. The pedestrianised theme is continued throughout the suburb.And in late 2007, the City opened its new Metrolink reception centre, a beautiful glass and brick structure, to ease the flow of visitors to its headquarters on top of the hill in Braamfontein. The new façade has greatly improved the stark appearance of the old Metro Centre and has created a visually pleasing link between the council offices and the Joburg Theatre Complex across the road.